5 Ways Animals Will Help You Get More Business

Buzzwords come and go, especially in ’emerging’ societies they seem like a must have in order to succeed and to impress. One of the current buzzwords trending on a global scale, but even more so in Asia, is “Cashless Society“. Especially now that we see so many events (e.g. Digital Thailand Big BangÂ & CEBIT ASEAN) happening that are flying the Thailand 4.0 slogan on their banners.

While I often times tend to make fun of buzzwords I have to admit that there is, obviously, a reason why those buzzwords are, well, buzzing. Not too long ago I even gave a talk about this very topic and hence will gladly concede that I too am guilty of using buzzwords once in a while. Lots of people know buzzwords and hence it’s easy to relate to them, it is important what comes after one mentions those buzzwords though.Â

So what does Cashless Society actually mean (duh?!) and is it reasonable for Thailand to aim towards said approach?

The term “Cashless Society” describes an economy in which financial transactions are not conducted via physical money (i.e. banknotes or coins) but rather through the transfer of digital information (e.g. electronic representation) between the parties involved.

Now while credit cards, debit cards and some form of cashless payment has been around for a while (just ask your fancy friend Debbie from High School who always showed off with her dad’s Amex) we are now moving towards a society in which paying cashless is nothing ‘upper class’ anymore or reserved to the privileged, it becomes ‘normal’. You don’t only pay five star hotels with credit cards anymore, you pay your (electronically ordered) taxi via the app, you pay the second hand shop via QR code or clear the bill in your favorite restaurant online. This makes the cashless society.Â

When we look at the Asian continent we can see that technological development doesn’t stop anywhere. Even cultures that usually are rather slow in terms of their speed of implementation of new developments can’t fight the future and are caught in the struggle between growing organically into new technological possibilities or being swayed by technological potential and seduced by the promise of quick profits.Â

One of the biggest countries on the planet, India, declared its goal to move towards a cashless society quite a while ago and is still struggling to make it happen. Problems that arise here are manifold but the biggest issue, quite likely, might be the discrepancy between those who are able to use technological gadgets and those who don’t even have electricity 24/7. You, obviously, can’t just say you move 1.3 billion people online onto a cashless system when you got millions of people living below the poverty line. The Indian economy might still be one of the fastest growing ones but that does not mean there aren’t any problems left to tackle before going completely cashless. How am I supposed to go cashless when I don’t even own a phone?

Let’s be honest though, when thinking Asia and technology most of us would probably think about China first. And, of course, Big C is all in on the trend. And way ahead of the curve. Going cashless in China is as easy as pie – especially compared to its neighboring countries. WePay, AliPay, FacePay – you name it. The main reason for China for going all in on cashless payment systems is, OF COURSE, to make life easier for its citizens and NOT AT ALL to track every single move of every single person in the country in order to assign a social score to everybody who lives there.

Now where does Thailand lie in the cashless development concept? Are we going cashless? Do we have the infrastructure to pull it off? What will the implications be? Most of those, and other related questions are obviously hard to answer within a single article but when we look at a few factors within society and technological acceptance due to cultural influences there might be some indicators found that we could use to estimate the eventual impact.Â

With the speed of implementation being heavily connected to the culture of a society it is easy to see why in Thailand the acceptance of new technologies always takes a bit longer than in more ‘open’ or less traditional cultures. We saw that with the skytrain that connects the airport to the city, or when Bitcoin hit the market. While other countries such as South Korea jump faster onto emerging trends, countries such as Thailand take longer to adapt to those trends. That’s not to say that this is ‘bad’ but it is certainly a factor to keep in mind when planning for the cashless society and “Thailand 4.0“.

While the speed of implementation is, as mentioned above, a factor it is also important to note that the start-up culture is quite buzzing here in Thailand which obviously drives on the cashless society approach. Moreover, with the government supporting digitalization (hey “Thailand 4.0”) we see a lot of companies taking payment online / digital. There’s the rabbit card system that now lets you top up your BTS (skytrain) card via LINE application, there are a plethora of electronic wallets (e.g. “True Wallet”) and electronic payment systems (e.g. “Blue Pay”). Even E-Commerce (and in relation cashless payment) is going ‘through the roof’ when compared to previous years.Â

Don’t your forget someone?

So now we learned that ‘digital’ and start-ups are booming and we already know that Bangkok and Chiang MaiÂ attract lots of digital nomadsÂ and events (as mentioned in the intro, Digital Thailand Big Bang, CEBIT, etc.) – so why isn’t everything awesome and we’re going for a cashless society right away?Â

There’s one factor we haven’t considered yet and that’s the majority of Thais that do not live in Bangkok, Chiang Mai or any of the tourist hubs that have the budget and infrastructure to push digital solutions. If you deal with

you might have to reconsider that approach. A cashless society can only work when every member of society is able to participate – if that’s not the case you can’t call it a real cashless society and forcing members of said society into using technology they can’t access or use should never be a valid option.Â 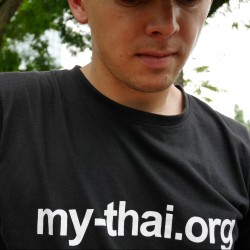 Sascha Funk
Founder / Editor at My-Thai.org
Sascha is the publisher of my-thai.org and switched from an online marketing agency life in Europe to a teaching and education life in Thailand where now started a digital transformation and business innovation consultancy. 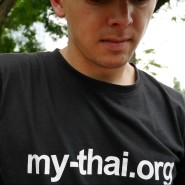 Sascha is the publisher of my-thai.org and switched from an online marketing agency life in Europe to a teaching and education life in Thailand where now started a digital transformation and business innovation consultancy.

How to Cope with Migraine when Living in Thailand

Cryptocurrency has been ‘hot’ and ‘hip’ for a bit now and some might say it even los its initial appeal ever since it has become more mainstream. With it becoming more mainstream is also saw a wider audience engaging with it and more and more…

Must-have apps for your trip to Thailand

A few of the most important Thai words you should know

Learning a new language can be difficult, and it can be more difficult when the language is different than your native tongue. In this article, you’ll find out what some of the most important words and phrases to know are in Thai, as well as…

5 Stereotypes You Should Ignore When Coming To Thailand

How to plan your perfect Thailand holiday

Thailand is an amazing destination for holidaymakers, with a diverse range of attractions and natural wonders, from the high peaks of the Himalayas to the coral-filled seas of the Andaman coast. The sheer variety of things to do in Thailand is what makes it such…